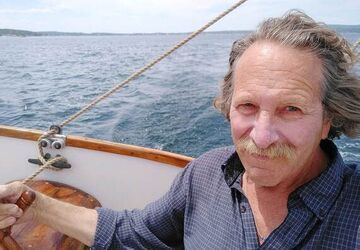 Captain Neal Parker
Born in Brooklyn New York in 1956, Neal Evan Parker began sailing the waters of New England as a teenager. Encouraged by early mentors, Neal became devoted to traditional sailing craft. He spent many years building ship models as well as crewing on full sized historic vessels.
Neal became a licensed captain by age 20. Since then he has skippered over a dozen schooners and traditional craft. In 1986 Captain Parker purchased and restored the 67-foot schooner Wendameen. Dedicating four years to her restoration, he placed the Wendameen into the Maine Windjammer business and sailed her from 1990 to 2004.
After completion of the Wendameen, Captain Parker took up building and restoring ship models professionally for clients ranging from private collectors to galleries and museums.
Captain Parker is also a published author whose books range from children's and young adult stories to volumes on maritime history.
In April 2005 after a run of almost 20 years Capt Neal Parker sold his beloved schooner Wendameen. Besides continuing to sail in the summer he is devoting his time to ship model work, writing and being a full time father.

Below is a list of just some of the vessels Captain Parker has been involved with over the years. Each one has a yarn all it's own described here in his own words.... 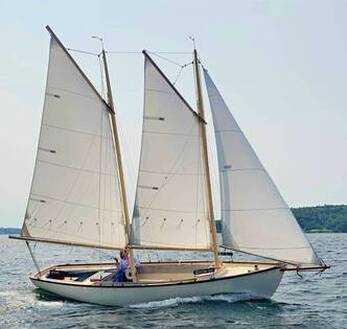 Schooner Mercuy
2017 to 2020
Since parting with the Wendameen I always dreamed of having one more schooner. This one lay untended in a grassy field for 18 years. There were large holes in the bottom and weeds growing out of the bilges. The entire boat was thick with moss and lichen. Naturally I couldn't turn away. She came to my driveway mid August and after 2 intense weeks she was patched enough to sail... which she did so well I spent the following winter on a thorough overhaul. There were some design changes along the way. Now she looks and sails better than ever. Oh, the ridiculous lengths you have to go through to have a decent boat when you're not rich... 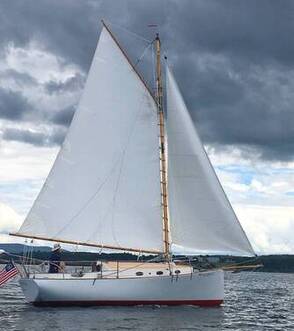 Sloop Rambler
2015 to 2020
The sloop Rambler was a step in a different direction. Before turning 60 and after a lifetime in wooden boats I decided, or shall I say, my bones decided, it was time to try fiberglass. I know what you're thinking but... Long story short, the Rambler was in a field next to a chicken farm up north here in Maine. I purchased her in the fall and after a winter of very extensive work this sweet unassuming sloop was ready to sail again. As it turned out a neglected fiberglass boat is not much less work than wood. She was worth every barked knuckle. 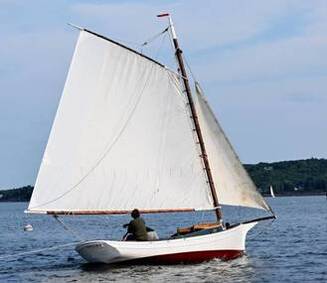 Muscongus Bay sloop Annabel
Summer 2015
There was an opportunity to acquire a very authentic replica of a Muscongus Bay sloop. She was built by the Apprentice Shop in Rockport in 1979 and spent most of her life hanging above an oyster bar at the South Street Seaport Museum... a place I had misspent my youth. I was finally swayed because this boat has the same name as my daughter Annabel. Most of the summer was spent giving her a major overhaul. When she hit the water she nearly sank because she was so dried out. Finally after weeks of "taking up" water we got under way. She sailed like a wild horse and I learned a lot about supposedly historical replicas! Since parting with the sloop I understand she's gone into another long slumber. 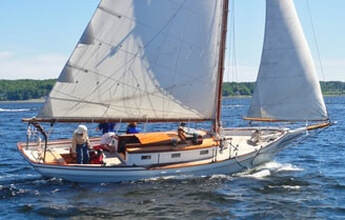 Sloop Heritage
2014 - 2016
Learned about a 30' sloop named Heritage that was starting to rot away down in Alabama. Designed by Murray Peterson and launched in Camden, Maine in 1962 it was time for the old sloop to come home. I spent two years in her refitting and preservation and chartered her during the summers. 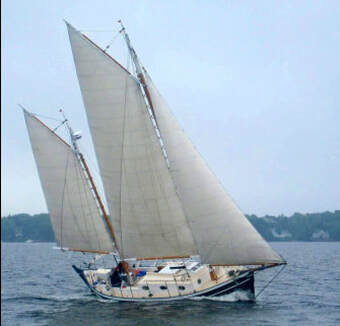 Quoddy Pilot Prudence
2007 - 2013
Purchased, rescued, refit and chartered the 34' Quoddy Pilot replica Prudence. The type was originally sloop rigged and was at one time the ubiquitous fishing vessel in Down East Maine. She is sturdy, beautiful and fast and now in the hands of new owners who take excellent care of her. 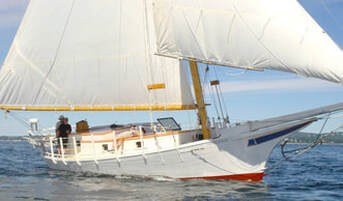 Skipjack Little Mamie
2004-2005
Owned/restored the 38' Chesapeake Bay Skipjack Little Mamie. I started with a bare leaky hull. She turned out to be the most unstable craft I ever sailed. I sold her and she is fast deteriorating near a barn not far from the field where I first found her going to pieces. 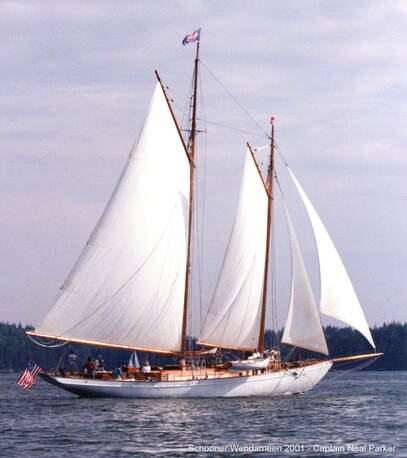 Schooner Yacht Wendameen
1986-2004
Owned, restored and captained the schooner Wendameen.
She was the boat love of my life. I spent four years restoring her replacing 90% of the original vessel. The full story is told in Wendameen, Life of an American Schooner published by Down East.
Since the Wendy and I said goodbye she's broken loose and smashed into  pier, been run aground twice and allowed to sink during the winter. With luck she will be in good hands again some day. 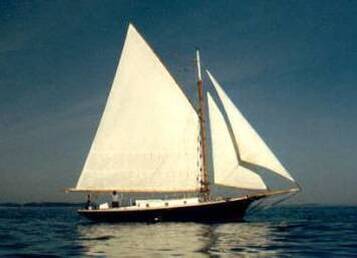 Friendship Sloop Irene
1987 Summer
Captain of the 42' Friendship Sloop Irene, (built 1902) chartering on Penobscot Bay. One of the largest Friendships ever built. Her mains'l was so large we only took the reef out once... and that was a mistake because it wasn't long before the wind picked up. Thins got pretty hairy for a while! Another great boat which fell into the wrong hands. Eventually the Irene was in such disrepair that sadly it was her fate to be dismantled. 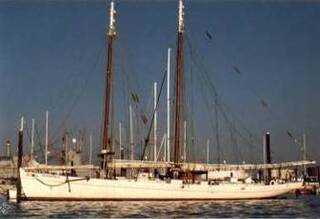 Schooner Sylvina W. Beal
1987 Summer/Autumn
Captain of the 78' schooner Sylvina W. Beal, (built 1911) chartering from Portland, Maine. A great old schooner. Subsequent owners did not give her the care needed. As of this writing the Beal is sunk in a creek in Cape Ann but there are dubious plans to restore her. 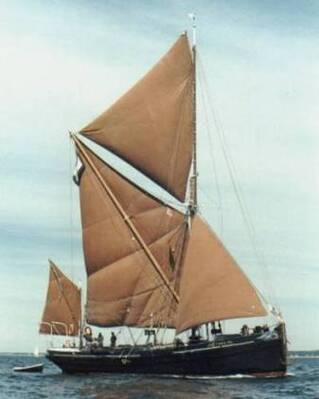 Thames Sailing Barge Ethel
1985 - 1986
Owner/Captain of the 84' Thames River Sailing Barge Ethel, built in Harwich England in 1894. This magnificent vessel was haunted by the most malevolent spirit I ever sailed with. Within a few years of my selling her she got her wish and died, but not before ruining the life of her subsequent owner as she had done to me. I am told some of her remains may still be in the mud on the Thames River, Connecticut. 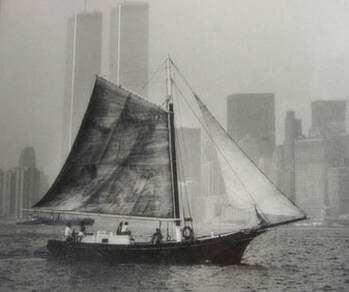 Clamming Sloop Francy
1983 - 1986
Owner/Captain of the 42' sloop Francy engaged in charters and sail training in New York Harbor. Built in 1946 in Deltaville Virginia, the Francy was one of the last sailing clam boats to work out of Sandy Hook, New Jersey. During the 1950's she was used to pirate copper wire from barges in New York Harbor. The wire, which had come from demolished buildings was burned in anchored barges to remove the insulation. I have many fond memories of this, the first big boat I was to own. Sold to an inexperienced captain, the Francy was trucked to a lake in Ohio for charter service. I lost track of her for years but came to learn she went to the bottom while on charter with flags flying. 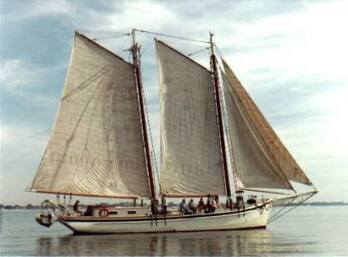 Oyster Schooner Charlotte Anne
1984 Winter
Captain/business manager of the 84' former Delaware Bay oysterman turned charter schooner Charlotte Anne of Fort Myers, Florida. Years later this fine schooner was taken to the Great Lakes, never good for a wood boat. I am told she rotted beyond repair and is now but a memory. 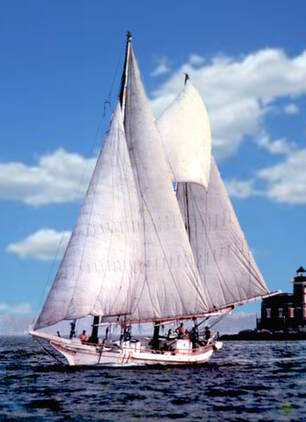 Skipjack Mamie A. Mister
1981 - 1983
Captain/business manager of the 56' skipjack Mamie A. Mister (built 1910) engaged in charters and sail training in New York Harbor. I grew up on this wonderful old girl. Her owner was like a second father to me. Before he passed away Carl wanted the Mamie to return to oystering so he willed her to a fisherman down on the bay. That fellow didn't have the wherewithal to care for the boat. Her scant remains are in a barn in Maryland somewhere. 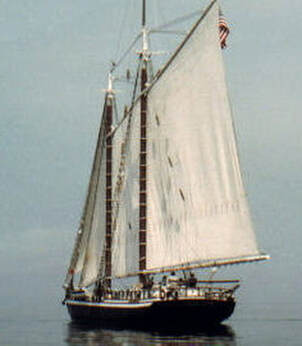 Schooner Stephen Taber
1980
Captain of the 67' schooner Stephen Taber, (built 1871) on charters from Camden, Maine. She was a pleasure to sail. An example of a good schooner who has always been kind to her owners. That's the reason she always has been, and always will be, well cared for. 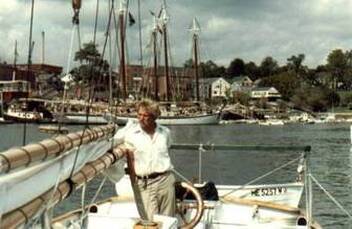 Parker aboard the Mistress
1979
Captain of the 45' schooner Mistress on charters from Camden, Maine. Built as a motorboat before being turned into a schooner, she sailed wonderfully... if it blew a gale and and you only went down wind. But it didn't matter. She was still a lot of fun. That's a much younger me at the helm. The Mistress still sails from Camden. 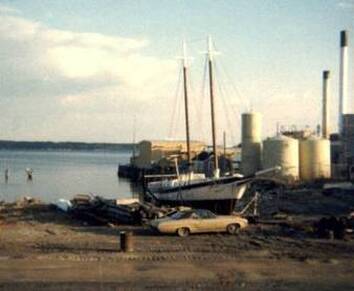 Schooner Richard Robbins Spring 1978
1978
Captain/manager of the 60' schooner Richard Robbins Sr. Originally built 1902 as a Delaware Bay oyster dredger she was rebuilt for windjamming from Rockland, Maine. I was hired to bring her to Burlington, Vermont on Lake Champlain to try and make a go of the business there.  She leaked so badly that she kept trying to sink. We pumped all the way on the delivery from Maine to New York and up the Hudson where the locks finally brought her to the lake. But when the bilges were clear she was a delight to sail. In the winter of 2019 after years of neglect, the poor Robbins, abandoned at a boatyard in New Jersey, was cut up and her decayed  remains hauled away.
1977 Spring/Summer:   First Mate on schooner Lewis R. French (built 1871).

1973 and earlier:   First Mate and deckhand aboard various historic craft, including the schooner Pioneer, sloop Clearwater, sloop Aka, skipjack Mamie A. Mister and brigantine Pathfinder. 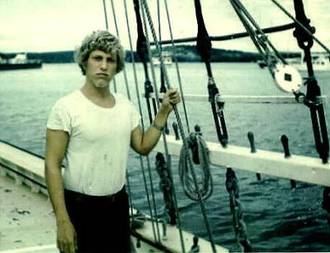 Deckhand Aboard the Pioneer
1973
Deckhand on the Schooner Pioneer. Pay was $60 a week... but a large ice-cream was only a quarter. 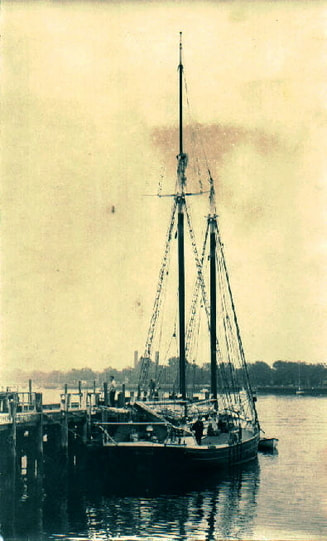 The Schooner Pioneer in Sheepshead Bay 1972
The schooner Pioneer at Sheepshead Bay, Brooklyn.
Right after I took this picture I went up the mast for the first time. Sat in the main cross trees pictured here. Going up was easy, but I was like a cat in a tree and it took me four hours to come down.
Sailing Inquiries Call Or Text
207-691-0748
During the Summer I am likely out on the water. Please be patient.
It may take a few hours for me to get back to you.
***