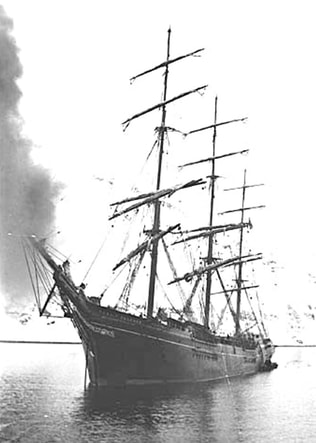 The Edna J. Appington in better days.
The origins of the sloop Olive can be traced back to her builder, old Captain Irving Munchkin. At the height of his career he was skipper of the grand ship Edna J. Appington...

The Appington was launched in Bangor, Maine in 1897. Originally working the grout trade between New England and Mediterranean ports she was, in 1918, converted as part of an effort to confound German submarines. Her topsides remained wood but her bottom was secretly covered with 3" thick iron plate. Torpedoes were supposed to bounce off her and ricochet back to the sub sinking it. The design concept was flawed and the Edna J. Appington, now greatly slowed by the weight of her iron plating, was eventually used to ship Navy Department paperwork from Boston to Washington. After the war she met with some success carrying mercury to a thermometer factory in Florida. Unfortunately, like many of her sisters in that trade, the now aging Appington met with a hot August day off Pensacola. Ultimately her cargo expanded and bursting, she went to the bottom. Two years later the ship was briefly refloated to be beached on the New Jersey shore where she became a firework stand for the next 20 years. The poor vessel's last hours require no description.

And what of Captain Munchkin? Rather than retire from the sea following the loss of the Appington, he took his meager life savings and built a small sloop which he called Pluffer, the nickname of his childhood sweetheart. His plan was to trace the elusive Northern Longitude, a sea route long sought before the building of the canal. He would have succeeded but for the fact that he didn’t bring enough long underwear and had to turn back. Shortly after, his dream not realized, Captain Irving Munchkin suddenly passed at the age of one hundred and three. 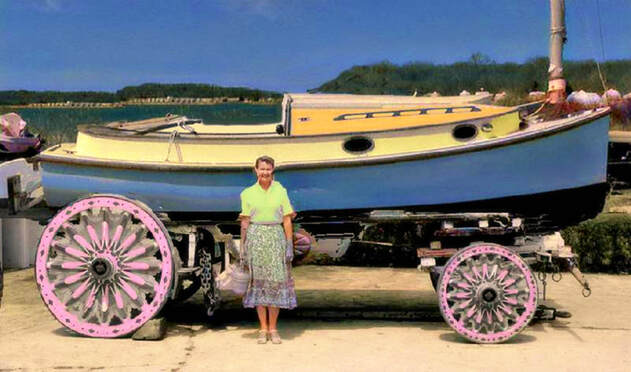 The Pluffer fitted out as as a circus attraction circa 1949.
For years the sloop Pluffer sat decaying not far from where she was launched. Her end was in sight until one day the boat’s remains were uncovered by a traveling circus as they set camp. The ringmaster, seeing the potential of making the hulk an attraction, had her fitted with wagon wheels. For the next 20 years the Pluffer traveled with the circus bringing joy to thousands. She would have remained in that trade but for a flash flood which swept the old sloop back to sea. Adrift for weeks she came to lay, half sunk, on the shore in Rockland, Maine. That is where she was discovered by Captain Neal Parker who, with a lick and a prayer, gave the Pluffer a coat of paint, a new name, and put her in the passenger trade hoping for the best… Parker says, “She’s old, not much to look at, but at least she’s paid for.” 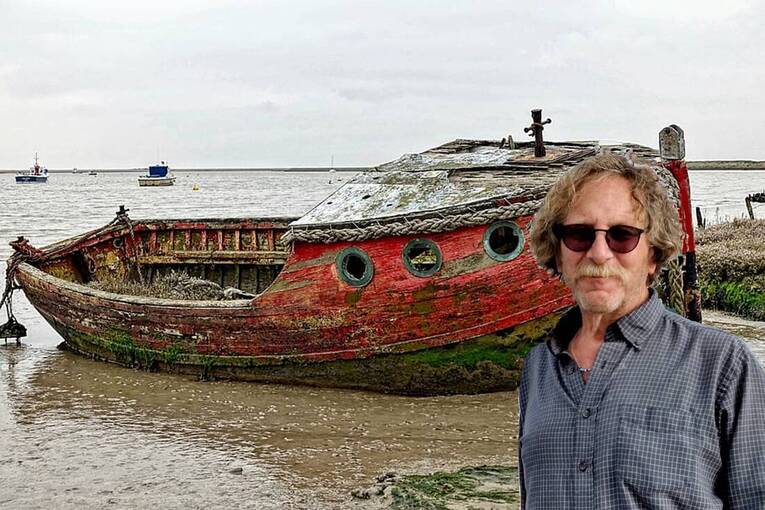 Above: The sloop Pluffer as discovered by Captain Neal Parker
Below: The Olive, now ex-Pluffer, as she appears today, bringing joy to all!